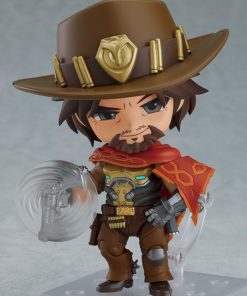 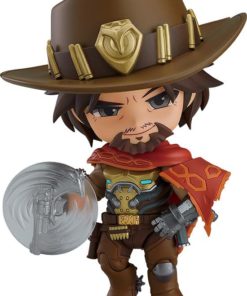 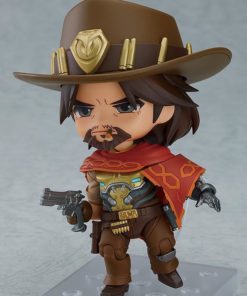 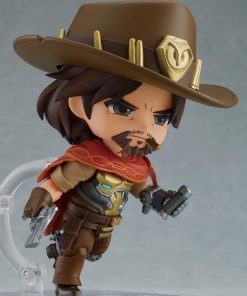 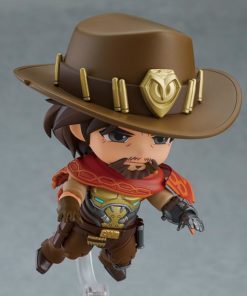 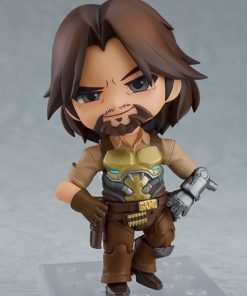 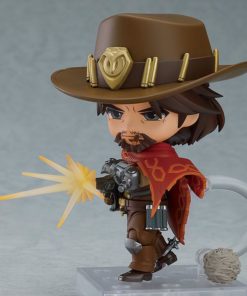 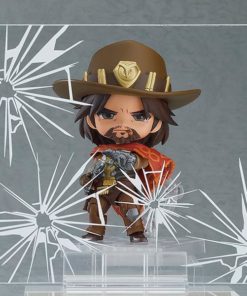 From the globally popular multiplayer team-based shooter Overwatch® comes the eleventh Nendoroid figure from the series – McCree! The Nendoroid figure and his cape are fully articulated, allowing you to display him in action-packed poses befitting of the gunslinger. His cape and hat are also removable, so you can display him in a more lightly equipped appearance not often seen in-game.

He comes with a standard version as well as a spinning version of his Peacekeeper revolver. In addition, he comes with two face plates, a flashbang grenade, Deadeye effect parts and the tumbleweed that rolls in front of him while using Deadeye! Recreate all of your favorite skills and poses.
Finally, a clear effect sheet based on his “Rolling Into Action” highlight intro is also included! Be sure to add him to your collection and display him along with the other previously announced heroes in the Overwatch® Nendoroid series!
Painted ABS&PVC non-scale articulated figure with stand included. Approximately 100mm in height.
Item Code : G90680
Overwatch
© 2018 Blizzard Entertainment, Inc. Blizzard and the Blizzard Entertainment logo are trademarks or registered trademarks of Blizzard Entertainment, Inc. in the U.S. or other countries.
UPC: 4580416906807

Shipping:
Processing Time: 5-7 Business Days Estimated Shipping Time: 14-50 business days depending on your country & customs. Shipping information of your order will be given to you after you buy VIA email.
Email us with any questions or concerns at [email protected]